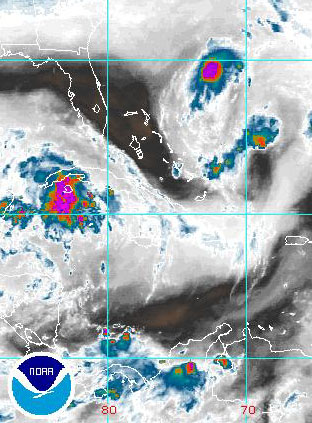 This disturbance has been sitting there for four days and is slowly drifting north. So far, it shows no tendency toward development.

The potential for tropical cyclone development in the Atlantic  remains unfavorable as the unusual weather pattern we pointed out several weeks ago continues. For the next 7 days there is almost no chance that the US Atlantic coast will be threatened by a hurricane. Crazy Florence continues to sit in the same place for the last four days, harmlessly spinning in circles, much like Crazy Alberto did last month. Although this is the sixth named storm, none of them have been of any consequence.

The Cape Verde hurricane season is seems to be coming to a premature end, and now the emphasis is going to shift to the Gulf and Western Caribbean. A depression has been attempting to form in the Yucatan Straits for the last three days but just hasn't been able to get going. It is only about 200 miles from Key West and may still yet develop. Florida west coast and panhandle boaters should remain alert to this one as it is very close and could flare up suddenly. With your very low land and shallow, gently sloping shorelines, be aware that even minor storms can produce high storm surges.

However, note that storms that move south to north are less of a threat to the west coat because winds tend to parallel the shoreline. Winds on the back  or south side tend to be much weaker. Even so, minimal precautions are still necessary. Those of you on north sides of bays are most at risk. This would include Tampa Bay, Fort Meyers and the north side of Naples as well as all Panhandle areas/

Gulf storms are much different than Cape Verde storms. For one thing, they have a lot less distance to travel before they make landfall. Another is that they mainly threaten only the Gulf coast. They pose very little threat to east coast Florida boaters as these storms have to travel across the peninsula. However, these storms can be a threat to small boats on the wider bays in the Cape Canaveral area under certain conditions.

Gulf storms are also notable for their maddening unpredictability in terms of where they're headed. Often they meander around aimlessly, wreaking havoc with everyone's work schedules. Though late season storms tend to be weaker, that is not always the case. Let's not forget Opal in 1995 which reached Cat 4 strength before going ashore as a Cat 3 and causing great damage in the Florida panhandle.

In the meantime, the eastern Atlantic coast is likely to remain free of hurricane threats for the coming week and possibly the rest of the season, while the Gulf coast could well see increased activity. I think there is a likelihood of increased Gulf storm activity this year as the season there seems to be starting very early. Look for a flurry of activity toward the End of September, early October.

In our companion article, The Need for Improved Hurricane Forecasting, we offered some suggestions on how the NHC  they can expand their service and improve the kind of forecasting products they issue.

At issue is not long range, but short range advisories. Since they haven't seen their way to offering  hurricane outlook forecasts, we decided to take our own amateur stab at the job, presented here. Weather-wise this has been a very unusual year with the Atlantic high shifted far to the west. Over the last three weeks, we've witnessed a weather pattern over the western mid and south Atlantic that has created a virtual barrier to the possibility of a tropical storm reaching the US. This came in the form of a major shift in the Atlantic or Bermuda high and the formation of several troughs extending deep into the Caribbean. This has prevented both storm formation, and to destroy any storms that do form.

These troughs continue to persist over the western Atlantic and Caribbean and continue to both inhibit storm formation and to destroy any that do form. Therefore, it is very unlikely that southeast coastal boaters will have any storms to contend with over the next week 9-4 through 9-9.

9-05-00 The Atlantic high is nowhere near Bermuda.

How much longer will this trend continue? Until such time as the western Atlantic high shows signs of shift back east, if it ever does. A recent very strong wave coming off the coast of Africa showed every sign of developing until it ran into the strong shearing winds that remain dominant along a north/south axis over the leeward islands. Attempting move through this trough, it's meeting  the same fate as the short-lived Ernesto As a tropical system, it's unlikely to make it as far as the windward islands.

Here's the question that a lot of hurricane alley residents would like an answer to: "Do I dare leave home on business, boating trip or vacation at this time?" My answer is that odds are very much in your favor that you won't be faced with dire warnings of a hurricane approaching while you're away for a week or so. Of course, if you're leaving your boat unattended, you should at least do the minimal extra securing.

Could this pattern suddenly change overnight? No, but it could change within 2-3 days, which would put us 9-10 days out from the development of, to the arrival of any Cape Verde storm, considering the distances such storms have to travel. By then we should be approaching the end of the Cape Verde season. The emphasis there being on the word should but it's best no one place bets on that.

This pattern could continue all the way through the Cape Verde season and become one of those rare years with no threats by Cape Verde storms. But keep in mind that there isn't just one hurricane season, but in reality three distinct seasons. The first is the early, or mini season that covers late May and early June when weak western Caribbean or Gulf storms can form. Then comes the Cape Verde season from about the second week in August through September, at which time the area of storm formation abruptly shifts back to the western Caribbean.

Only when that happens, the storms that form in the Western Caribbean aren't limited to Weak Willies. Opal in 1995 (October 3-5), Cat 3, was such a storm. The Caribbean season is only 4 weeks away, and it kind of makes you wonder if there are no more Cape Verde storms, will the Caribbean season be more active? Historically, such logic hasn't been the case. Still . . . you have to wonder. Or will this be an Andrew type year where one lone superstorm comes roaring in out of the blue? We need a crystal ball to answer that one.

Stay tuned, well let you know if this weather pattern changes. Or, you can check out this link to the NOAA web site where there is a wealth of tropical data available.