Where to Go?  Not everyone lives in south Florida (yet) where there is an abundance of man made canals that offer good protection. If you do have them available, try to select a canal that is as far inland as possible, and, most especially, one that is parallel, not perpendicular, to the shore line.

There are two reasons for this. One is that waterways, be they rivers or canals, tend to funnel the wind and waves, allowing the storm surge to rise even higher, along with greater wave height. A canal parallel to the shoreline completely prevents this. Secondly is the domino effect. When boats upwind of yours break loose, guess what's going to happen? Yep, they come smashing into your boat, so perpendicular waterways are doubly dangerous. After Andrew, there were such canals where every single boat on that canal ended up in a smashed pile at the end of the canal, so don't underestimate this danger.

Large numbers of boats are located off large bays or sounds, which are also dangerous. You have to get away from the lee shores of big bays. You've heard the term "fetch?" If not, fetch is the distance wind and waves that can travel before they  reach your boat. Fetch is something you only want in small doses, like not more than 200 feet or so. 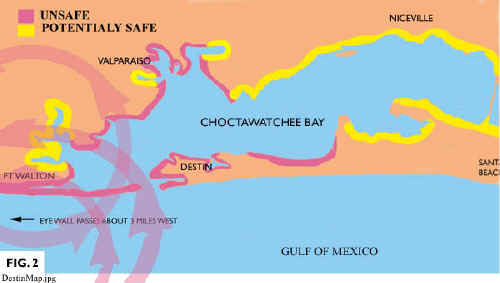 Following Hurricane Opal at Choctawatchee Bay, I identified numerous little fingers and tributaries that curved off the lee shore of the bay. These would be tributaries that hook around behind the main shoreline. Many of these proved to be quite secure locations, despite the fairly high storm surge. The illustration shown above will help give you an idea of what kind of areas might be reasonably safe. Note that the southern side of the bay (at right) as long as it is away from the narrow sandy stretches of beaches, provided lots of potential sites. Moreover, storm surges were highest at the inlet near Destin where large numbers of boats were destroyed. Yet the inland areas north of Ft. Walton were fairly secure, mainly due to a lack of fetch. Most boats in that area survived.

However, if you're particularly observant, you will have noticed an error. The yellow "safe" area show along the northern shore of the bay is not safe at all. Why not? Because of the 5 mile fetch of the bay that would produce large waves on the northern shore. >> Part 3 - Storm Prediction