Storm Prediction Where you are located relative to where the storm makes landfall makes a huge difference. Unfortunately, this is not easy to predict more than 24 hours in advance, though the advance predictions of storm paths has been getting better. Storm path projections are issued by the Hurricane center and it's a good idea to pay attention to them. If you're going to end up on the west side of the storm, then the issue you have to deal with is low, not high water. 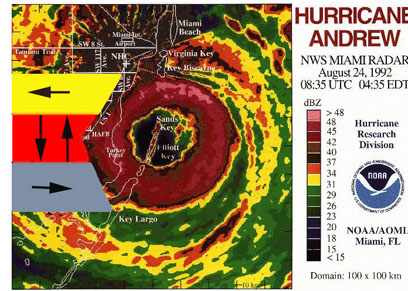 The illustration above shows the wind directions of Andrew as it came ashore. Since this storm made a nice, straight, steady path, it was pretty easy to figure which side of the storm you'd be on.

Rivers can also provide good security, especially if they're not the wide, funnel mouth type. If a river takes a turn parallel to the shoreline, that's probably a good bet. But check on the history of the river to make sure it's not prone to flooding from rainfall.

The photo at left depicts a sure-fire disaster in the making, an overcrowded canal where the boats are too close together with inadequate pilings. Tightly packed, crowded marinas present much higher risks. Here the reason is because narrow slips don't give enough space to extend your dock line length to allow the boat to rise and fall with the storm surge. Note that none of these boats have stand-off pilings, and the finger piers are only half the length of the boats. When one breaks loose, it will take others with it. >> Part 4 - Making of a Good Dock