The Problem of Complacenty, Relocation 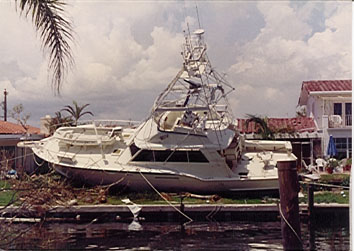 Arrrggh! It's that time of the year again for those of us who live in hurricane vulnerable areas. Well, heck, at least we don't live on the San Andreas fault, and though we can't closely predict hurricanes, we at least know they are coming and are given some time to prepare.

And preparation is what it's all about. As I'm sure you know, we are in a period of greatly increased hurricane activity. Storm guru Dr. William Gray is once again predicting a very active season thanks to that kid out there in the Pacific referred to as La Nina.

The Problem of Complacency

I don't know about you, but the frustration factor of frequent near misses is beginning to take its toll. Last year we had three Cat-1 and several tropical storms come through our area, and that produced not only a lot of complacency, but an entire field full of wrecked boats here in Ft. Lauderdale. All with owners who did little or nothing to protect their boats, including not even bothering to tie them up properly.

And then there was Floyd, a super storm that came roaring straight at us just like Andrew did, only to turn away at the last minute, but not without causing a great deal of panic. With the fresh memories of Andrew, no one was complacent about Floyd's 150 mph winds.

The point is, even minor storms can produce a lot of damage to boats. It doesn't much matter if the wind is 75 mph or 175 mph if your boat is in an exposed location, or not properly prepared. Apparently, a lot of  boat owners were lulled into thinking, "Ah, a cat one storm. No big deal." As the field full of broken boats being sold at auction suggested, it was, indeed, a big deal.

Complacency happens because it's a lot of work getting prepared, and it's very frustrating to go to all that work, only to find out it's a false alarm, which, fortunately, it often is. That leads us to take them less seriously. But remember, unlike brief thunder storms, the high winds of even minor tropical storms can easily last 8-10 hours. Rather than just the force of wind speed, it's the long term strain on things that can cause damage. Weak dock lines break, and weak docks begin to fall apart.

The way to beat complacency is to make preparation as easy as possible. That means to have your materials and logistical solutions down cold. Knowing what to do, and when to do it, with all necessary man power and materials available. In case you haven't already learned this, heading out to the marine supply store to make panic-stricken last minute purchases is about the last thing you want to do. Facing horrendous traffic, empty shelves and long lines at the check out counter wastes your valuable time and raises your blood pressure to uncomfortable levels. 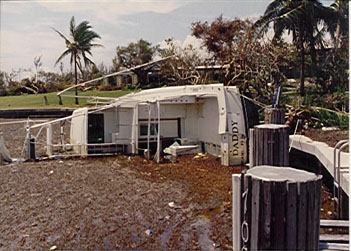 August 15th marks the beginning of the most serious period of storm threat. You still have time, so if you haven't done your planning and obtained your supplies, why not do it now? Here are some points we've assembled from a major study that we performed for insurance companies.

Your first consideration is whether you need to relocate your boat to a safer refuge. If so, you're not going to be able to do that alone,  here's where the planning comes in. Who can you get to help you? You'll need someone to drive you to your boat and drop you off, then pick you up at wherever you move the boat too. That takes time. Will the people you expect to help be available? Can you get started early enough, or will you get adequate warning? Well, not always . . . . Think about the panic that tends to set in when threatened by a Cat 3 or higher storm. Bridges closing down early are among the many problems that can be encountered.

You can relieve yourself of much of this stress if you think about permanently relocating your boat to a safer place. Oh, I know, you probably selected your dockage due to convenience to the nearest inlet, only now it's not so convenient because your boat is vulnerable. If you are in a place with a 12 month boating season, one solution might be to change your dockage twice per year, or arrange an alternate location for the hurricane season. Here in Ft. Lauderdale, that is entirely possible due to the large amount of available inland dockage. In other areas, that may not be an option. But, if it is, you may want to take advantage of it. Nearly all large yacht captains have a preplanned refuge lined up in advance.

How? Some inland facilities will offer unused dockage for just this purpose, though those are likely to be scarce. Or, there may be private residential dockage available. Check the newspaper ads. One way we do it here is to head into inland waterfront neighborhoods where we know there is unused dockage and start asking around. Offering a couple hundred bucks for use of the dock for a couple of days is likely to sound very attractive to the homeowner. >> Part 2 -Where to go?