It's Always a Tough Decision

From the numerous storms that have struck the southeastern US in the last decade we have learned that something like 75% of all severe boat damage can be prevented by understanding these storms and knowing the right protective actions to take.

We also learned that media sensationalism and too many false alarms are like the little boy crying "wolf" too many times. After a while, it gets very tiresome and we cease taking the warnings seriously, particularly for tropical storms and weak hurricanes. We’ve heard all the dire predictions about high storm surges that never materialized, or wind speeds that were only half what they said they’d be. You react to two false alarms and when the third one comes, you ignore it hoping that the result will be like the others.

The best protection that can be given to our boats is to move them out of harm’s way. But evacuation is very time consuming and requires the help of other people, so before we think about going to a hurricane hole, we want to be sure we’re not responding to a false alarm, or that moving is even necessary. The purpose of this article is to get you thinking about the security of your boat’s dock location and to help you determine if your boat is a casualty waiting to happen.

The effect of hurricanes is not everywhere the same. You see that ominous looking thing on the satellite photo, the area called the Central Dense Overcast, but not all of that area is subject to hurricane force winds; of what we see visually, only about half the size of the thing is actually the storm. Of course, the eye and eye wall area are the worst, yet often times as little as 50 miles out from the center, winds are less than hurricane force. For other storms, fifty miles out is nearly the same as the center. This kind of information is given out by the National Hurricane Center as a graphic on their web site at www.nhc.noaa.gov along with other graphic prediction charts that are very useful toward making decisions about what needs to be done.

Storm effect predictions can fail to materialize for four reasons: (1) the storm path doesn’t go where predicted, (2) the storm substantially weakens before landfall, and (3), because we are not directly in the eye path, where the storm’s fury is much less, (4) the storm passes to the east or north of us, thus we are exposed to the back side only with offshore winds.

Storm surges on bays and sounds. Note the effect of a double surge as wind moves the water to one side of the bay.

These are not false alarms, but conditions that can lead us to the perception that there was no need to take serious preparations.

It’s not an easy thing to decide when you should or should not move your boat to a safe harbor, but with a little advance research and planning, there’s a lot we can do to get a better idea of what kind of conditions we’ll experience, and thereby reduce the number of times we take unnecessary preparations.

The first step is to get a general understanding of the geography of your immediate area. No two areas are exactly the same and the effects of a storm in one will be different than in others. For example, it took decades to realize that storm surge  is vastly different off deepwater coastlines than for off shallow coastlines like many parts of the Gulf and Carolina coasts. One of the most important things we can do is to learn the history of the storm’s effects in your area.

Storm surge graph showing surge height relative to center of storm. Notice how the surge can actually be negative on the west or south side.

Since storm surge has the most damaging  effect on boats,  more than wind and waves, so we need to understand where it occurs and where it doesn’t. This we do by understanding the rotating winds around the eye of the storm along with its effect on water and the land. For example, 95% of all Atlantic hurricanes approach from the east to south quadrant. Since we know that wind rotation is counterclockwise, this makes wind directions very predictable. And because we can reliably predict wind direction, we can more reliably predict where the wind will pile water up on lee shores.

Since most of our dockage facilities occur within bays and sounds, I’ll focus on these. One of the worst of these are funnel shaped bays where wind pushes water into an increasingly confined space, with the effect that the water piles up to unusual heights. Along the Gulf and southeast coasts, most bays are merely separated from the ocean by barrier islands that are nothing more than big sand bars topped by dunes. Storm surge and wind may or may not cause extremely high water levels. It depends on whether the surge over washes the barrier island, and whether the inlet is large enough for the surge to fill the bay or sound fast. With tropical storms and weak hurricanes, this usually doesn’t happen, so that the leeward side of the barrier island may remain fairly safe. But if the inlet has any funnel shape at all a slow moving storm will have time to push enough water into the bay raise water levels. 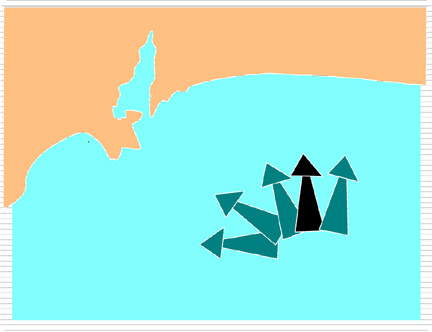 Possible storm approach is usually within a 90 degree quadrant. At any location on this map, the effects of storm surge will be very different depending on direction. If you were docked in that bay, which directional approach would be the most dangerous? Would any be relatively safe? Answer at bottom of page.

Mobile, Delaware Rhode Island Sound, Galveston and Lake Pontchartrain are all good examples of funnel bays. The next important factor is the wind direction relative to the orientation of the bay. Water levels will rise the highest when the wind is going to blow straight down the length of the bay. Obviously, if the storm approach is perpendicular to the bay length and inlet, then water isn’t going to be pushed in, and that bay may actually end up being quite safe. If the wind blows straight down the length of the bay, water levels will be higher at the back of the bay, than at the mouth, particularly if the bay mouth is wide.

The good news about storm surge is that it will occur only on the north east or right side of the eye, with the worst at the northeast eye wall. When we plot graphs of water levels along the coast, what we get is an S shaped curve with a big spike east of the center that falls rapidly and then tapers off gradually as the wind field diminishes to the east, or in the case of the Mid Atlantic and Texas coasts, to the north and east. Various coast line irregularities will cause minor spikes. To the south and west, we get negative water levels due to winds being offshore.

On bays we have two surges, a macro and micro as shown in the above graphic. The macro is due to the major oceanic surge while the micro is the wind pushing water to one side or end of the bay. The micro may by no means be little and can equal the levels of the oceanic surge, which is what makes bays so dangerous. Depressions, bayous and estuaries along the leeward side of the bay will have even higher water levels due to the funnel effect. If sounds are separated from the ocean by only low lying sandy and narrow islands, wash over from the main surge will fill the sounds even higher.

Fetch is the undisturbed distance over water which the wind blows, thereby resulting in larger waves. The more fetch, the larger the waves will become as will the micro surge that can be out of proportion to the main oceanic surge. Hurricane force winds are capable of piling a lot of water up on the leeward side of even a narrow bay. For example, the surge on two mile wide Choctawhatchee Bay during Opal with 125 mph winds was 3 feet, on top of a 6 foot macro surge for a total of nine feet.

Since bays are usually irregularly shaped, there are often areas that are sheltered from waves as well as limiting the storm surge. The trick is to try to guess which ones these will be relative to the direction of a particular storm approach. These are usually going to be along the leeward and eastern shores and judging the fetch relative to wind direction will generally tell us where those places will be.

The assessment of exposure is important since boats in some areas will risk destruction even in strong tropical storms whereas others will be safe even in weak hurricanes. It can save you a lot of work and heartache if you develop a good understanding of the risks of your boat’s location. If your area has had prior storms, it helps to talk to people who have some local knowledge about how storm surge behaves. And to find out which areas are more secure if your present one isn’t one of those. 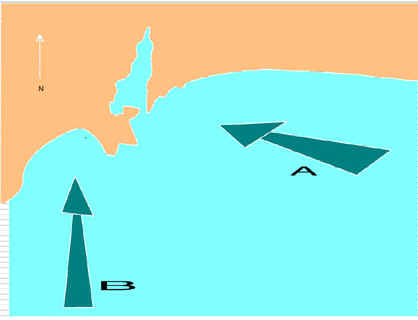 With a storm approaching from direction "A", boats in the bay would not experience a very high storm surge.  it would be a different matter with the approach of storm "B" where the greatest force of wind pushes water directly into the bay.