One of the Easiest Aspects of Boat Maintenance Pays High Dividends When Done Right After Every Use.

If you're a first-time boat owner, perhaps you aren't aware of just how important it is to thoroughly wash the salt water off after every use. Judging by the number of boats we board that are covered with salt, a lot of boat owners aren't. For example, we were just on a 9 month old boat with a half tower and hardtop, that was little used, but loaded with salt. The aluminum pipe frame and other hardware on the boat was already badly corroded. Unfortunately, that is irreversible damage.

Even if you don't take spray over the bow, your boat will still get covered with the salt that swirls back into the cockpit via the station wagon effect. The dang stuff just gets all over everything, and if you don't get it off, you'll pay the price of new turning to old in a big hurry.

If you've never watched a professional captain or crew washing down a large yacht, you'll see that they all follow the same basic procedure that I'll explain in a moment. Oh, I know that this might seem like a no-brainer, but believe me how good a job you do can make a huge difference on how good your boat looks a couple years from now.

First, let me tell you about a few more bad things that salt can do to your boat. For example, did you know that salt can permanently stain window glass if you leave it on long enough? Yep, it can.

Salt actually has several negative effects on anything it comes in contact with. First, you already know that it is corrosive to metals. What you're less likely aware of is that it is also corrosive to boat finishes of all kinds, including gel coat. That's why the finish on your hull sides, which don't get much sun, also deteriorates as though it were getting the full dose of ultra violet. But when salt dries into crystals, it's also abrasive, just like sand.

Moreover, salt is hydroscopic. That means that salt is capable of condensing water out of the atmosphere when humidity is high. That's why they put salt on dusty roads to keep the dust down. The salt will also mix with dew at night to become salt water once again.

When washing down, it's best to follow this simple plan.  I've actually timed how long it takes to do a good job on a 45 foot Sea Ray Express: 30 minutes.

First, you should first spray the entire boat with a fine spray to get everything wet. The reason is that it takes a minute or two for dry salt crystals to dissolve completely. This should include virtually all hardware like a pipe frame top, T-top or tower. Not only do you rinse the outside, but also the inside and under side of the top. If you don't, the aluminum is going to look ugly real soon. Be sure to spray around all that piping that holds the soft top up, if that's what you have. If it's a sail boat, try to hit as high up on the mast and rigging as possible.

After you wet everything, give it a few minutes for salt crystals to dissolve. Then come back and hose it down thoroughly. For the final rinse, start from the top down, doing the hull sides last.  On a flying bridge boat, start with the bridge first. This will help prevent water streaking at those points where water runs down from the superstructure, finally rinsing the hull sides last.

If you have an outboard boat, don't forget to do the engines, including the undersides of the mount brackets. I do this after tilting the motors up. As for seat cushions, I recommend that you stand them on their sides or edges, zipper side down, and lightly rinse those down. And by the way, this is also the best way to store them so that they don't hold water and start to rot. Stand them up on edge and leave them that way in a protected place. Do this and they'll probably last twice as long.

When hosing down cockpit decks, it's a good idea not to use a high pressure nozzle. Why? because that high pressure will work water under your hatches and end up in the engine compartment where steel parts will rust. It's best use a fine spray, rather than a blasting stream, around all windows and hatches. I pay special attention to get all salt off of things like winches, radar scanners and other such expensive components.

I'm not going to suggest that you chamois down the whole boat, though some people do. But you should at least do the windows to avoid permanent water spotting. I would always chamois down the helm area and most all plastics and bright metal.

Detergents and Cleansers   Just in case you're not aware of this, never use strong detergents, and most especially abrasive, chlorinated cleansers on your boat for general cleaning. First because the chlorine is corrosive and will permanently stain and discolor virtually anything that is anodized aluminum, like rub rails, windshields and trim. If you have a small area of imbedded dirt, try to use a stiff brush first. If that doesn't do it, you can use a non-chlorinated cleanser, or better yet a specially formulated boat cleaner. ALWAYS be sure to fully rinse away all residue, including the places where it runs over the side or out the scuppers.

Brushes and Pads  As a general boat cleaning brush, I'd first recommend one of those imitation lamb's wool jobs as these are least abrasive on bright finishes. For tougher areas like non-skid, select a natural, not plastic, medium stiffness bristle brush. Avoid very stiff bristles as these will scratch. Use the lamb's wool on any surface that you'd wax; use the bristle brush only on the non-skid surfaces.

Sliding Window Tracks   If you have sliding windows in your boat, the tracks and aluminum window frames will last a lot longer if you rinse and clean them out occasionally. You'll be amazed when you see how much dirt and salt these tracks can accumulate. I actually take the hose with nozzle inside and squirt the accumulated debris and salts out until the track is clean. Usually twice per year will do the trick during a short season, 4 times annually for a 12 month season.

Deck Drains  While you're at it, use that pressure hose to clean out all those little drain holes in the deck hatch gutters. If those drains clog up with debris, as they often do, the gutters will overflow and put water into places it shouldn't be. Like maybe on your engines or generator? Also check for these drains around window frames and anchor or rope locker compartments, too. Anywhere they exist, they need cleaning occasionally.

On Being Obsessive-compulsive Personally, I hate the feeling of salt all over everything. It gets on your hands and in your clothes and keeps everything damp and sticky. That is why I'm a big fan of high pressure washdown systems and those nifty little HydraKoil hoses that store away so neatly. On one day or longer cruises I'll hose down the cockpit area any time we stop, whether it's for trolling, swimming or a quick dive to catch dinner. 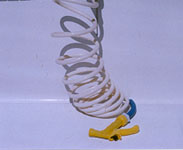 The solution to bulky garden hoses.

I'm not sure whether I'm just being obsessive about it, or if it just feels good to cool down with all that freshwater splash getting all over me during a hot afternoon when the temperature is 92 and there is no wind. After all, what could be easier than to just stand there with a hose in your hand? Probably I do it  because it kills two birds with one stone, but in any case, I'd noticed over the years that corroding hardware has never been much of a problem on boats I had. It won't be on yours either if you take a few minutes longer to do it right.

How to get rid of that last inch of water

The essentials of after-use clean up
One of the Easiest Aspects of Boat Maintenance Pays High Dividends When Done Right After Every Use.