You know how it is when a bunch of guys, especially boat captains, are sitting around a dockside table drinking beer at the local watering hole. Like old soldiers, they start telling war stories as indeed these guys were.

Not only have I heard stories like some of the ones told that afternoon, but had some direct experience myself with what they were talking about. Rogue waves are a phenomenon that few but the most experienced boatmen have ever witnessed. My only experience with serious rogue waves came during a few ill-advised Gulf Stream crossings when seas were running 12-14 feet.

Yet few people are aware that "rogue waves" can come from sources that are other than natural, namely ships. And you don't have to far out at sea to be effected by them. 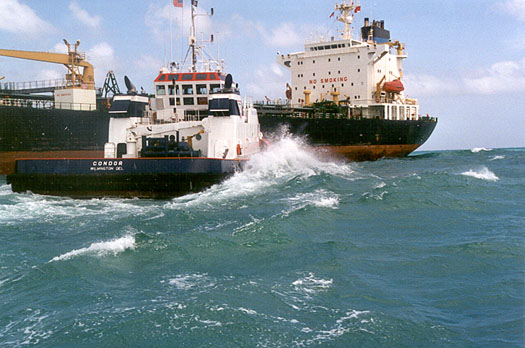 Tug hits the bow wake of large freighter which is easily 8 foot.

After these guys had exhausted their tales of "can you top this," one guy popped up with, "Let me tell ya 'bout what happened to me from the wake of a passing supertanker." He went on to say that he nearly lost his boat and would have chalked it up to a rogue wave. But the seas that day were not high enough to create serious rogue waves, plus he couldn't help but notice that there was not just one big wave but three of them, all very evenly spaced. "Not really waves," he said, "but big swells. What happened here, see, was that there were four foot seas on top of these big swells and I hit it just plain wrong. I mean, the bow went down and the water went up, and when the shouting was all over, the boat was half-wrecked and near sunk."

"Geez Louise, how da hell that happen," the mate across the table slurred, grinning and smelling another tall tale.

"A good three feet of blue water right over the bow," says Capt. Josh, slamming his beer bottle down. "Took the pulpit right off, half the railings and blew out the starboard side windows. Musta taken about 1500 gallons of water in a heartbeat."

"Ole Josh is fartin' in his hat again," says Mickey.

"Oh, no, I believe him," I said. "Over the years I've investigated three such cases of ship wakes sinking or almost sinking  and severely damaging yachts. It happens."

"Don't pay any attention to Josh, he's got one of them mail order six pack licenses come somewhere out of Nevada. Last time he seen a wave was when one took off the top of his mother's bathing suit at the beach" says another, getting a big laugh. "That's why he's been drooling ever since!"

Connie Ralph, one of the most highly respected bill fish captains said, "Seriously, though, those tankers can make a heck of a wake when they're goin' flat out with a full load. Just for kicks, I paced one headed up the Gulf Stream, her decks nearly awash tootin' along a good 26 knots SOG and the damn wake from that monster was a good eight feet. I'll bet ten miles away it was still rolling along at six foot."

"Connie is dead on about what happens when you got normal seas on top of a wake like that," Josh said, "I've seen it myself. A lot depends on the how the direction of the waves are meeting the wake. If they're coming together at oblique angles, the same kind of angling that causes  rogue waves, then what you get is a rogue wake!!! You've seen it when two boat wakes collide? Like that."

"Yeah, man, it can be real dangerous for those damn rear engine boats with all the weight in the stern. Couple years ago, there was this guy in a Sea Ray fishin' over by the oil rigs, one of the capped off ones. Damn fool put a stern line onto one of the pylons and just hung off there. It was a nice day, seas running only about two foot or so. But the story goes one minute they were fishin' and the next they were swimming. The guy that told me this was on that boat and said he didn't know where the waves came from, but they saw them coming too late. The stern dipped down and the next one rolled right over the cockpit. Hell, I can see the look on their faces now," Jimmy snickered. "Hey, where the heck did mah boat go?"

The boys at the table all got a hoot out of that one.

"You hear what happened to ole Carl Barnes some years back. He did the same thing with that Cabo he had, a damn California boat with no engine room bulkhead in it. Same thing, they go stop for a swim on a nice day, everyone's in the water and they're driftin along stern-to. Nice and calm, next thing he knows there's these big swells go right into the cockit because they left the door open naturally cuz they's swimmin'. Sheet, before they could climb back aboard there's the REAL TIME  pointing bow up," he said, shaking his head. "If that boat had a proper bulkhead at the back of the engine room, it probably wouldn't have happened, but even so, you don't ever want to drift stern to the seas. Where those heavy shipping lanes are, you need to be aware that some of these ships make damn big wakes and that the ships are long gone before the wake gets to you. You never see the ship."

Captain Ned asks, "That what happened to those people off Houston a couple years back?" referring to three people that drowned when their boat went down for reasons unknown."

"Prolly. Story I hear they were all too inexperienced to even know what happened. Their first boat and almost the first time out, but that could be it."

"Well, I know of two fatalities that occurred from ship wakes. There was this guy with an express type boat, rear engine, but no transom door. He gets up early and goes out fishin, taking his wife's two poodles with him because for whatever reason she wanted the dogs out of the house that morning. Anyway, he anchors off the reef in  Pompano Beach and has a couple lines out. Yeah, he's anchored off the stern. In this case we know it was a ship wake because the guy was looking right at it when it happened. It was dead calm that day, and the way he described it was funny as hell.

"He was standing in the cockpit and had just cast a line out when the stern dripped down and never came back up. Next thing he knows he's standing in water up to his waist holding a fishing rod. 'I'd give a million bucks for a photo of the look on my face,' he said. But hey, I had just locked the dogs in the cabin to keep them out of the way. The water was pouring down the companionway and I knew I'd go down with the boat if I tried to rescue them. Hell, I don't like those dogs that much anyway so they went down with the ship. That's one way to shut up a yapping poodle!' The guy  had a grin stretching from ear to ear when he related the story."

The howls of laughter were interrupted as the waitress showed up for the next round of drinks. In any case, I think you'll find the moral of the story self-evident.

Boat Safety at Sea - Part I

"Rouge wves" can come from sources that are other than natural, namely ships.