Length, Weights and Other Trivia

The length of a boat is one of the most important factors affecting the boat's price. Yet, the represented length does not always reflect the true size of the boat.

With the advent of integrally molded bow pulpits and built in swim platforms, there has been a lot of confusion over how a boat length should be properly represented. A few, though certainly a minority, of boat builders have included the bow pulpit in the length over all (LOA).

Most others use what is known as length on deck (LOD) that does not include the length of the pulpit.

Confusion can arise because the pulpit is an integral part of the deck. Therefore, to call it LOA is not inaccurate. Some refer to length with and without pulpit, which eliminates all confusion. If the builder leaves any doubt about this, be sure to clarify it.

Not only are there built-in bow pulpits today, but also built-in swim platforms, or what may be called transom platforms or extensions. Should these be  included or excluded in the length? Some of these are bolt-on molded sections, while others are molded into and are integral with the hull. The use of bolt-ons is rapidly passing, though there are plenty of used boats with these things. For the most part, I'd argue that bolt-ons do not reflect useable hull length, and should not be figured in as the hull length.

However, the integral platforms do represent useable space on the boat, as well as actually extending the length of the hull proper. Therefore, this is rightly included in the hull length representation. 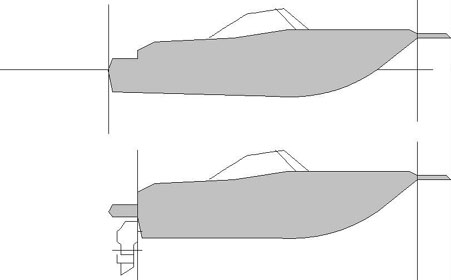 Consider these two boats, They are actually the same LOA.  The stern drive boat also has an integral platform, but note that it does not provide any additional internal hull space.  Therefore, we rate it as being 24" shorter than the inboard boat above.

Many builders have taken to applying model numbers like 2685 or 450 that might seem to represent the boat length, but are actually misleading. The Sea Ray 500 is actually a 45 foot boat where the 500 seems to represent the length including the bow pulpit.

There has long been much misunderstanding about the lengths and weights shown on Federally documented boats. How these numbers are derived goes back to the World War II days when many yachts were impressed into Coast Guarding services. At that time, the Coast Guard wanted to know the useable interior volume of the yachts. This was achieved through a procedure called admeasurement.

Therefore, the "Registered Length" shown on Federal documents represents an average of the length on deck and the length waterline. Basically, this number cuts the lengths of the overhangs at bow and stern in half. Thus, if you have a boat that is 50 feet on deck and 46 feet on waterline, the registered length will be 48 feet. The same holds true for the beam of the boat; it's an average between the widest point and the beam at water line.

So what about the tonnage, that doesn't ever seem  to agree with the stated builder weight? Well, the registered tonnage is derived much the same way. In other words from a particular formula that was designed to fit the Coast Guard's needs. Hence, the registered tonnage shown on your USCG documents bears little resemblance to the actual weight of the boat.

These number should be provided accurately  by the builder, and usually is. But keep in mind that that is with empty tanks and no equipment. By the time you add fuel, water and equipment, the draft is likely to change, though usually not enough to cause concern. If you're marking your hull to add a boot stripe, be sure to do that with the boat fully loaded.

The weight of the vessel as could be measured on a scale versus the calculated displacement are not quite the same, though the difference is not enough to concern boat owners. Displacement is the volume of water that is displaced by the hull of the vessel measured in pounds or tons. This derives from a math calculation made by naval architects during the design process. No one actually ever physically measures the displacement of a hull as that is far too costly to do. Displacement as a representation of boat weight is no longer used by pleasure craft builders, though it is always used for ships.

So where does the builder weight come from? Commonly stated as "dry weight," it normally means the weight of the boat without any fluids in tanks. Since most builders end up having to ship boats,  which requires obtaining an actual measured weight, builders typically ship the boat off to a truck weigh station where the weight is there taken less the weight of the trailer. These weigh stations, operated by federal or state governments, are actually quite accurate to within 100 lbs. The scales are tested and certified annually.

What about travel lift scales, are they accurate? No, they are not sufficiently accurate to rely upon. That's because the loads are distributed over a number of lifting slings that can result in considerable error. Nor is there any requirement that the be calibrated and certified.

Builder's Weight -vs- the Weight Now

Naturally, the builder's dry weight and what your boat weighs now after fitting out and filling all the tanks is not the same. You can figure the difference with reasonable accuracy by taking the tank capacities and multiplying the weight of liquids per gallon.

Then you have to figure weights added during fitting out. Typically, this will be about 10% of the dry weight, assuming that you are not making any major additions like a tender, davit or other particularly heavy additions.

What About Water Absorption? I've heard it said that boat hulls will absorb up to 10% of their weight in water. This is a myth and is not true. I doubt even a wood boat could absorb that much, but certainly not a fiberglass boat. The amount of water that a fiberglass hull is capable of absorbing is insignificant. Even the amount of water that could be absorbed by things like seat cushions and deck cores is not going to be to the degree that it will affect boat speed.

Most builders have learned the hard way not to advertise boat speeds. There are far too many factors involved for them to do so reliably. There have been many lawsuits over failures to achieve advertised speeds, which has  prompted most builders to remain silent on that subject. If a builder does make a representation as to speed, you'd best take that with a grain of salt and not believe it until proven on a sea trial.

Your First Boat - Part I

By far, the most frequently asked question we get in our emails is the one by first time boat buyers asking about what brand they should buy.

In this segment we'll take a look at the basics of trying to decide exactly what type, style and shape of boat that you think you need, versus what may actually best fit you purposes.

In Part II, we made the recommendation that an used boat offers excellent value and good prospects for reliability. But how old of a boat? And how do you go about completing a deal?

Length, weights and other trivia

All Is Not Well in the Boating Industry

The Little Things That Add Up to Big Dollars