Tropical Paradise in the Shadow of the City

Where else could you go in the continental US and find a tropical island loaded with miles of white sand beaches lined with real, honest to goodness coconut palms, that lies 2 miles offshore of one of the nations largest cities? 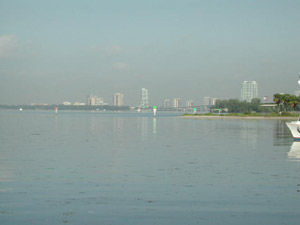 The answer is nowhere, for Key Biscayne is unique in all the US as being the one and only of its kind. Made famous by Richard Nixon for his "Key Biscayne White House," the island is three miles long by a mile wide, of which over 50% of which is taken up by Crandon Park that contains the largest stand of coconut palms in the continental US.

For the cruising yachtsman heading south for the winter, Key Biscayne offers a bit of paradise in the shadow of the city in a state that's now become known for its overcrowding, traffic jams and seemingly endless sprawl of shopping malls and tourist traps. A great place to spend a day or two imaging that you're traveled long and far to some remote Caribbean island where about the only thing that will damage your illusion is when you turn to face west where the skyline of the city of Miami can't be missed. 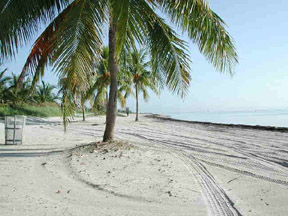 Rounding the bend, the city soon disappears from sight and you are greeted by scenes like this.

Key Biscayne is actually the third island in the chain that makes up the Florida keys. Just to the south is the Biscayne Flats and Stiltsville, a small community of houses built on pilings seeming out in the ocean. A tad east and south of the Flats, Biscayne National Park begins, the only tropical underwater park in the US, and the home of some marvelous coral gardens.

The island can be explored either on a day trip, or on an overnighter as there are two good public marinas that are close to Crandon Park which is on the north end, while the Village of Key Biscayne occupies the south end. Plus there are plenty of protected anchorages. From the marina, you can bicycle or dinghy to any of the beaches or the park. 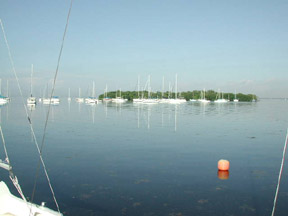 The park is nothing short of beautiful. It once had an almost incredible stand of stately coconut palms that was wiped out by a disease in the early 80's. These were replanted with a disease resistant type and the palms have made a remarkable comeback. The park represents a good balance between the natural and the man-made as hidden within is a golf course and  tennis courts, and of course, numerous public beaches that I rate as the best to be found in Florida. 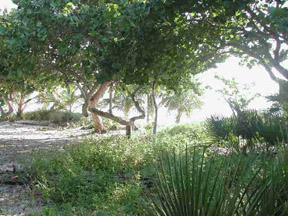 Eastern shoreline just off the beach. The natural vegetation hasn't been bulldozed and covered in concrete as in most other Florida locations.

The waters off the beaches slope gently and are shallow and quite warm, with water temperatures like bathtub water in summer, the mid 70's in winter. Not just wide expanses of sand, the park jungle comes down close to the water's edge, giving you the sense that you have just stepped out of the jungle and onto the beach, or vice versa. 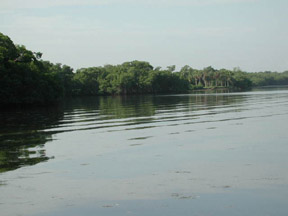 Mangrove areas on the West side.

Tropical jungle is what Crandon Park is all about. The west shore consists of mangrove marshes while the east shore has the high ground. Numerous pathways and open areas are sculpted out of the jungle that allows for some interesting nature walks. But beware, the mosquitoes can be fierce, and so is the tropical sun. The recommended clothing for a day on the island is not kaki shorts and a polo shirt. Long sleeved tropical whites offer protection from both the sun and the bugs. 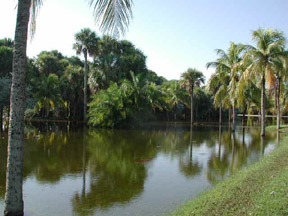 The best time to visit the island is on weekdays, for being so close to the city it is a popular weekend retreat for locals. On Saturday mornings, the line up at the causeway toll both gets to be a half mile long and six lanes wide. If you have crowd phobia, weekdays are the time to go when the beaches will be almost deserted. Off season weekdays (July-November) is like having the place all to yourself.

The village itself doesn't offer much to do or see, but if you've got bicycles aboard, it's about a 20 minute pedal from Crandon Marina into the village where you'll find a decidedly Cuban influence and several Cuban cafeterias that are worth trying out. Though you'll hear Spanish mostly spoken, most residents are bilingual. If you dare to hit the place on weekends, be prepared to feel like you're in Cuba. 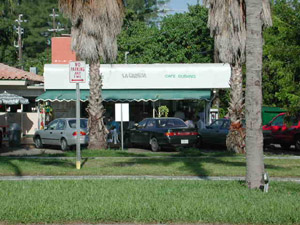 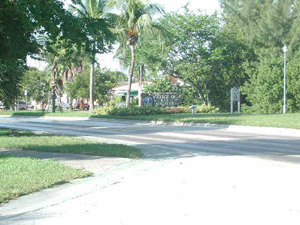 One of the more fun things to do is to take a dinghy excursion around the island where you can explore the mangroves around the back side, or the shallow waters on the Atlantic side. While it appears that you're out in the open Atlantic on the east side, actually this area is like a lagoon, protected by the offshore reef.

Heading out to Biscayne National Park offers some very worthwhile scuba diving and snorkeling. This area is dotted with shallows and coral heads and should only be approached with calm waters and someone aboard who can read the water. Navigation among the reefs is strictly visual.