During the last several months we had the opportunity to sea trial four boats with Yamaha outboard motors in the 200 to 250 hp range. Two sets of these were on Grady-White 272 Sailfish, and another on a Pursuit 2855. This makes for a total of eight engines ranging in years from 1995 to 1999, which gave us a pretty good look at how these engines are performing over time.

Compared to all the other engines, we were generally impressed at the superior performance of Yamaha engines. First, we can tell you that none of the eight engines had had any major work done on them. This we can determine by looking at the painted bolt heads on the engines and see that no bolts had ever been turned.

Another thing we look for is salt weeping from the cooling system and cylinder head gaskets. When that happens, it means that internal corrosion is taking place, and it's only a matter of time before some really bad things happen. None of our test engines revealed this problem, a very good sign indeed. We'd add these were Florida boats used in sea water 12 months per year. Two were stored out of water, and two were permanently afloat, including the 5 year old engines.

If you read the advertising, every manufacturer touts the latest and greatest high tech engineering that results in the greatest power, longest life, highest reliability and, of course, their engines hardly burn any fuel at all. And, of course, we all know that this isn't true. After all, outboards have a well-deserved reputation for being gas guzzlers, which is one drawback they can't overcome by virtue of the fact that outboards burn a combination of gasoline and oil. That means that the fuel they burn is not as powerful as any engine that has a crankcase of oil for lubrication. That translates to having to burn more fuel to attain similar power outputs over a conventional gas engine. Add to this the fact that outboard propellers are not as efficient as inboard props and you have two good reasons why outboards burn more fuel.

Regardless, it was the performance of these engines that really began to capture our attention. For one thing, outboards tend to be notorious for their inability to hold certain speed ranges. With many engines, if you want to go, say, 2600 RPM, the engine simply will not run at that speed. The engines will either want to surge forward to a faster speed, or fall off to a lower speed.

Why is that? Well, it's mainly due to two things: less efficient propellers and low torque at low speeds. Another factor is carburetion. Here's one of the advantages of electronic fuel injection, which can precisely control the amount of fuel the engine receives, whereas a carbureted version cannot. In testing these four sets of engines on different boats, we were amazed at how well they could hold a speed. The 225 and 250 hp versions were best at this. Testing each at speed ranges in increments of around 500 RPM, we found that each would almost exactly hold that speed indefinitely without falling off or creeping ahead.

This was aided by what we feel is the best set of engine controls in the business. We've long complained about crappy engine controls. You probably know what I mean. Those flimsy plastic jobs that feel like they're going to break off in your hand if you push on them two hard. In fact, a recent sea trail with a set of Mercury controls only 9 months old ended up with the idle control button stuck and jammed with the engine racing away out of control and no way to stop it. 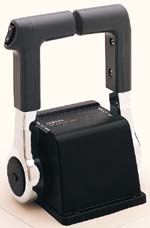 We compared those with the Yamaha engine controls which, although they are plastic, feel solid and function smoothly. There was none of those poor tolerances that let the levers flop around in every direction. Indeed, when operating some of the competition's controls, we have to wonder how boat owners can tolerate such shoddy products. These Yamaha controls were a real pleasure to operate.

Far and away, for us the biggest attention getter was the optional Yamaha instrument package which is just the neatest and most reliable set of outboard instruments we've run across. The digital tachometers have large, bright LED displays that permit very accurate speed control. Then there is the bar graph tilt and trim readouts that, in the case of all eight engines still worked, even after as much as 850 hours and 5 years of use. That, we thought, was amazing considering the propensity of such gizmos to crap out after about the first year.

And for the economy minded, "the fuel management system," which is nothing more than  fuel flow meters a la Floscan meters, are great. This allows you to determine at what speeds you're getting the best fuel economy. You discover nifty things like that at certain points the engines will burn less fuel at higher speeds than slower. Now, if this sounds like a virtual impossibility to you, it can be explained by the fact that nearly all boats have certain hull speeds that are more efficient than others. The fuel management system allows you find out exactly what speeds those are.

Other features of interest are the motor covers. They are strong, heavy and well built. On most of the competitor's models, we find the latches to be clumsy and difficult to operate. Putting the covers back on usually involves a lot of fumbling around trying to get the latches to line up just right, and more often than not, quite a bit of frustration. Not so with the Yamaha's: just set the cover in place and push down. It just snaps into place and the lower gasket makes a good seal with the lower cowl, no muss, no fuss, no sweat.

Yes, there were a few things we could gripe about. For instance, the dual electric power trim motors, which are located on the lower mounting brackets, constantly get wet. And despite the "saltwater series" moniker, they do rust, often badly. Yet, oddly enough, despite two very badly rusted sets of motors on one boat, the darn things still worked. Frankly, we think it's time that these things be replaced with an electro/hydraulic motor that mounts on the inside of the boat, not on the motor where they're submerged part of the time.

Then there is the dark metallic blue paint on the engine covers. In the Florida sun in April, we measured the surface temperature at 185 degrees. When paint gets this hot, of course, it's not going to last long, and on older motors it was badly faded. Yamaha ought to change to a lighter colored, non-metallic paint. It would hold up a lot better.

How Much Power? Another thing we've been learning about outboard powered larger boats, like in the 27 to 30 foot range, is that more horsepower is generally better than less. Sure, you're concerned about fuel economy, but there is a catch 22 here. Testing two identical Grady-White 272's, one with twin 200's and the other with 225's, the one with the lower power actually burned more fuel at lower speeds than the bigger engines. Why? It has to do with torque and larger propeller size that results in greater efficiency at lower speeds.

While only a 50 hp difference, we found an amazing difference in overall responsiveness, as well as speed. Only 50 more horsepower of the 225's, which is only a 12.5% increase, resulted in 10.5 mph more speed, for a 30% increase in speed. Thus you get more than 1:1 increase in speed for hp per mph. But more than speed, the boat performed substantially better at lower speeds, particularly in the 25 mph range which is where you'll run most often.

Service  Those of you who were Yamaha owners five years ago are probably familiar with the fact that this manufacturer did not have the best of relations with their dealers.  We heard plenty of stories from our dealer friends about how they played hardball, with the result that a lot of dealers dropped Yamaha. Unless you were lucky enough to have one of those dealers that would really go to bat for their customers, you may have felt the pinch.

Admittedly, we do not have the resources to perform customer satisfaction surveys, but we do keep our ears to the docks. About the best we can tell you in this regard is that we're no longer hearing either customer or dealer complaints like we did in the past.

In summing up, these two models of Yamaha engines were the best designed, best performing engines we've seen yet. Well designed, smooth and quiet running, and all-around best performance Granted, they're priced higher than the competition, but we feel that the difference in price is well-justified by the difference in overall quality and performance are the qualities that make these engines our first choice.